TOURIST BOARD OF DRAŠNICE

CONNECTION BETWEEN MOUNTAIN AND SEE

Drašnice is a little village located about ten kilometers south of Makarska, on the way to Dubrovnik. Today it has a population of just over 300 people, but at the end of the 19th century it had a population of over 900 people.The very name Drašnice comes from the thorn bush sort called drača žestica, which is an abundant plant in the wider area of Dalmatia. The place itself was first mentioned in the Turkish documents from the late 15th century. But the area of Drašnice was populated since ancient times. The remains of material culture in the area of Drašnice date back at least 8,000 years.

Hillforts and tumuli are the remains of the Illyrians, the ancient population of the Balkan Peninsula. A small number of tumuli is located in the coastal area, but most of them are located behind the mountain of Biokovo, where you can also find many hillforts.
A large area of land, which is covered by olive trees today, was once the site of a Roman settlement. In general, you can trace the continuity of settlements in that area back to prehistory. Not far away from a rather big reconnaissance tumulus is where an ancient settlement developed. In that area you can gather building or kitchen pottery material within seconds.

According to legend, this settlement was ruined by unknown barbarians who rushed through this part while moving from East to West, to present day Italy and France, after the fall of the Roman Empire. The Early Middle Ages, i.e. the period from the 8th to 11th century, is not well-known with regard to the historical events in the region of ​​Makarska Riviera. It is only occasionally that some indicators have occurred suggesting possible events. Not far from the aforementioned area where the settlements developed rapidly in the Roman period, more precisely above the neighboring place of lgrane, a church of St. Michael was built at the beginning of the 12th century.

At the end of the 15th century, the Turks invaded Bosnia, causing migrations of the Bosnian population that fled to the coastal area. Among them were the Franciscans, who found it appropriate to build a small church and a monastery in Drašnice. But, because they were not used to the fierce wind called bura which sometimes blows under the mountain of Biokovo, they fled from Drašnice ten kilometers to the south, to the village of Živogošće.

In the 17th century, also close to the area mentioned above, the church of St. Stephen was built, probably on an old church site. Among other churches to mention, there is St. George’s, the patron saint of Drašnice, St. Catherine’s, St George’s in the hamlet of Srida sela, St. Roch’s at lzbitac, and a small chapel of St. Nicholas in the hamlet of Urlići.

What makes Drašnice special are the well-preserved stone houses of the Podbiokovo belt, which were inhabited until the great earthquake of 1962. That same year, the building of the Adriatic Highway was started, which caused the people to move to the coastal area. It also boosted tourism, so the whole population moved to the coast almost overnight. In a way, Drašnice is like a small local version of Pompeii, because it is a place where you can feel the spirit of the times that dominated the Podbiokovo area for centuries. Here you can see the old stone houses, sometimes with the old tools for processing olives (turnji) in front of them, and still find the authentic interior inside each house. 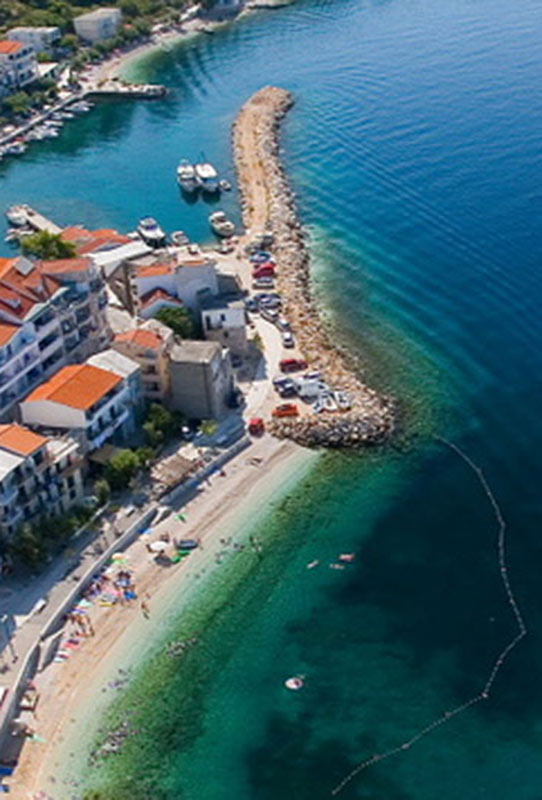